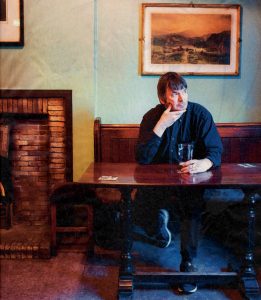 I’ve been drinking in the Oxford Bar since the mid-1980s.  I held my stag party there in June 1986, back when owners John and Margaret Gates ran the place as if it was their own home.  In fact, I know of one regular who bedded down one night on one of the pews, having nowhere else to go, startling the cleaner when she unlocked the door the next morning.  John eventually appeared as the character of Professor Gates, the pathologist in the early Rebus novels, as did my friend Jon (“Dr Curt”) who did me the favour of introducing me to the bar in the first place.  The Oxford Bar has always been special.  It was also a place where serving and retired cops used to drink, which is why I decided Rebus would drink there.  In the first few books, he sups in fictitious bars, but I moved him into the Ox eventually.  Some readers reckon I’m in the books too  –  there’s mention of a writer who sits at a table in the back room.  But that’s actually journalist (and poet) Hayden Murphy, who’s been drinking there even longer than me.  I knew Rebus would like the Oxford Bar for the same reasons I do  –  no bells or whistles; just beer and conversation.  And if you don’t feel like the conversation, well, no one’s going to force you.  And there’s still the beer.  The Ox also manages to be centrally-located yet not easy to find.  This to me is Edinburgh in microcosm  –  a city that seems very public and yet very private at the same time.  Not that time has stood still in the Ox  –  there’s a heater in the front bar these days, and a working fireplace in the back room.  It’s always been at the forefront of innovation, deciding to do away with its ‘pub grub’ just as other bars were starting to expand their range of hot meals.  Even the famed Rebus Roll (corned beef and beetroot) has gone.  The focus is back on thirst-slaking and conviviality.  These days I live across town from Young Street and have to walk past about twenty pubs to get there, yet still find myself heading to the Ox once a week or so to hang out with faces both weel-kent and new, to eavesdrop on possible stories, to pick up local gossip and political and historical debate, and to relax.